The Association is comprised of Founders, Ordinary Members, Adherents and Sympathizers and is governed by:

The President is appointed every 5 years by the Ministry of Health among high-profile scientific personalities proposed by the CD. The position is currently held by Professor Ruggero de Maria.

The Director General of ACC is Dr. Paolo De Paoli.

The Board of Directors includes the President and those who hold the Scientific Directors pro-tempore position in the individual oncological IRCCS Founding Associates. The Assembly shall appoint a maximum of six (6) additional members from among those who serve as Scientific Directors pro-tempore in other IRCCS Ordinary Associates. Moreover, four additional members having specific competencies in the oncological and scientific field, appointed by the Assembly upon the nomination of Ordinary Members other than those mentioned above, could also be included. The duration of the mandate of the members is related to their position in their respective Institutes. The Associate members have a five-year mandate.

«Science has a wealth of knowledge and technology that has not yet been transferred into patient care. My commitment is to make sure that our network brings innovation to clinical oncology practice so that patients with advanced cancers can look to the future with more confidence».

Director of the Institute of General Pathology of the Catholic University of Rome and President of HuGef, the Biomedical Research Foundation of the region Compagnia of San Paolo. 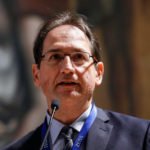