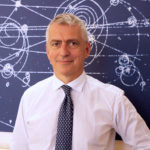 In Italy, basic research in the field of the fundamental constituents of matter and the interactions that regulate their behaviour is conducted by INFN, the Istituto Nazionale di Fisica Nucleare (National Institute for Nuclear Physics). INFN is a community of over 6.000 people committed to ensuring that fundamental research provides its best results.

Examples of this are the historical achievements of recent years with the Nobel Prize winning discoveries of the Higgs boson and gravitational waves and with the Nobel Prize awarded to Giorgio Parise for his studies on complex systems. In short, INFN is a community that makes the so-called curiosity-driven research a national excellence.

The INFN is present throughout the country. It works in close cooperation with the university world: it is, in fact, historically organised into linked Divisions and Groups, which are based in the physics departments of the main Italian universities, in national laboratories and centres. At the same time, the Institute also has a significant international dimension, dictated by the global nature of scientific research in particle physics. So much so that INFN carries out a large part of its research activities within the framework of international cooperation initiatives: it participates in experiments in the most prestigious laboratories and research centres abroad and has collaborations in dozens of countries.

INFN carries out both theoretical and experimental research in the field of fundamental physics. In particular, there are five main research areas: subnuclear physics, astroparticle physics, nuclear physics, theoretical physics and technological and interdisciplinary research. In order to conduct the experiments, the Institute designs and produces, in its own laboratories and in collaboration with industry, cutting-edge technologies. Technologies which, although designed and developed for fundamental research, often lead to useful spin-offs for society, in the medical and the cultural heritage sectors or for the environment, to mention just a few examples.

As an institution working on cutting-edge scientific issues, INFN has a significant impact on the progress of knowledge, on technological development and on the economy of the country. Aware of this role, and of the fact that it is the duty of a public body to share its activities and the results that derive from them with society, the Institute is strongly committed to what today is called the third mission: i.e. to technology transfer, advanced training and the dissemination of the scientific culture.